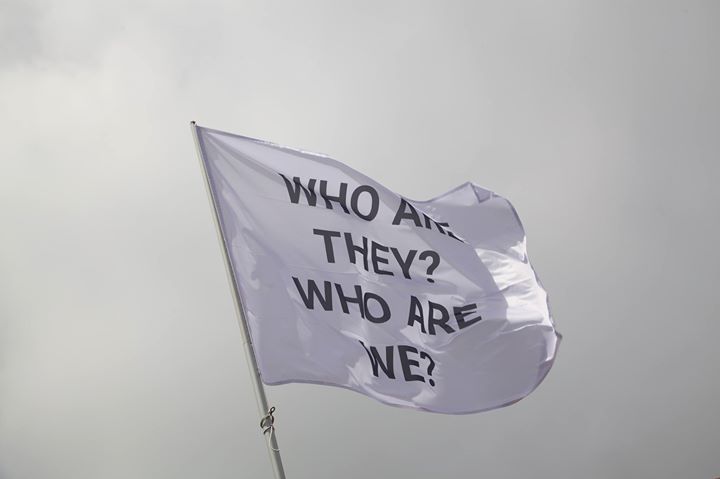 Who is? Project is an ongoing art project which aims to tackle issues around immigration systems and globalisation. Founded by Iman Tajik and Jonas Jessen Hansen, Who is? Project has been created as a space for open conversation surrounding the current European migrant crisis. Symbolised by a white flag embellished with the words “Who are they? Who are we?”, the profound display of artworks will speak about the invisible borders that the human race have managed to create throughout history. After the EU referendum and the US election, the flags will act as a catalyst to discuss global division and the “growing fear of the stranger”.

Iman and Jonas stand as two artists who have continuously worked on global issues. Alongside Who is? Project, they have together created the exhibition ‘Who is?’. The exhibition took place at the Civic Room in Glasgow as part of the Scottish Refugee Festival 2017. For the exhibition, Iman created multiple videos depicting everyday life obscured by water — which is his way of symbolising and expressing his views on the ever-growing European migrant crisis. Jonas has additionally gathered interviews from both volunteers and asylum seekers who have fled such traumas and are now painfully waiting in a state of limbo. Their current project, Who is? Project, is an extension of this work and will become the start of a human chain that represents solidarity from around the world. “Dividing the society into ‘us and them’ will create problems,” says Iman and Jonas, “when right from the start, society places immigrants and second-generation immigrants as not being part of the community. We are all people. We have bodies and minds, 10 fingers and 10 toes, but we’re all different, and the fact that we are, is what creates a enriched and multicultural society”.

The Who is? Project is a public exploration situated different places around the world. Currently 14 places around Europe has taken part in the project: Fotografisk Center in Denmark, Hamburger Kunsthalle in Germany, Civic Room in Scotland, lokal_30 in Poland, Galleri Format in Norway, 2B Galéria in Hungary, INDA Gallery in Hungary,Brass’Art Digitaal in Belgium, NOASS in Latvia, Tirana Art Center in Albania, London Gallery West (University of Westminster) in England, Camphill Gate in Scotland, The Ubiquitous Chip in Scotland and GoMA in Scotland.
Tovább az esemény oldalára »