Gadi Ezra: From the Law Books to the Battlefield 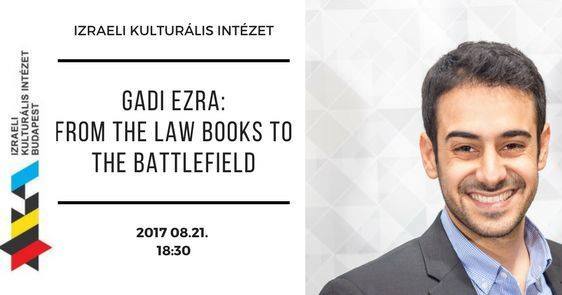 Gadi Ezra holds an unparalleled perspective on war – as both a human rights attorney on the one hand, and a soldier in the Israeli Special Forces on the other. He is currently advising the defense establishment.

Gadi was selected by Forbes Magazine as one of the most influential leaders in Israel under the age of 30 (the ’30 UNDER 30′ article is available here). He holds three law degrees from both Tel-Aviv University and NYU School of law, specializing in public law
and human rights. At NYU, Gadi was the first Israeli chosen to deliver the convocation speech on behalf of his classmates (the speech is available here). Previously, he headed the Laws of War desk at the Israeli Ministry of Foreign Affairs (where he advised
diplomats on humanitarian law, the Israeli-Palestinian conflict, human rights and sanctions regimes), and was selected to clerk directly for the State Attorney of Israel, Mr. Moshe Lador, where he participated in cardinal decision-making processes

Gadi is an experienced public speaker. His global tours, in which his lectures were delivered nearly 100 times in North & Latin America, Europe, and Israel, were highly covered by the Israeli and international media (the latest coverage is available here and here).
During his studies in Tel-Aviv, Gadi was recruited to fight in Operation Cast Lead, in which his Special Forces unit was among the first infantry units to enter the Gaza Strip.

Drawing from his personal experience as well as his strong academic and practical as a human rights lawyer, Gadi examines the complexities of applying the laws of warfare in actual combat, illustrating modern challenges using first-hand experiences. Gadi’s lecture exemplifies the difficult dilemmas soldiers face in modern warfare, and the high standards applied in the IDF despite lacunas in the law.